Four months after my most recent attempt to outsmart MS, a specialist told me that was it. I’d exhausted all multiple sclerosis treatment options and my best hope was to find some cutting edge study or wait patiently for science to catch up. And P.S. the treatment I’d just received precludes me from most studies. I’d sensed this was coming. Over the years I have given myself more than one Extreme Makeover – Immune System Edition and while it is impossible to say how much or how little impact all this tampering has had, it is fair to say that nothing has managed to put the brakes on. Stupid MS is smarter than me. And so, as I have done many times before, I began to adjust to a new normal, this time trying to make peace with the reality of my bullshit Frankensteinian gait.
Then just six weeks later and much to my surprise, my conservative neurologist recommended an off-label, experimental treatment with a side order of the MS carrot. That dangling bit of salad on a string to which every relapsing remitter is beholden. The vegetablication of the possibility that despite all odds, with some aggressive intervention and a decent amount of risk, things could maybe suck a little less.
In addition to my regular injections and infusions of disease modifying drugs, my relapses have been treated with trips to the ER for countless rounds of IV solumedrol. The first time I experienced some steroid induced recovery it felt like a freaking miracle. I was blind and then I saw. I was lame and then I danced. I’m talking LITERALLY, people. Like a magic trick of biblical proportions. So what if it meant a little osteoporosis? Steroids were the carrot and I was the hungry pony.  Over the years I would make this deal with the pie-faced devil again and again.
Here’s the thing.
Carrots are okay. For a vegetable. 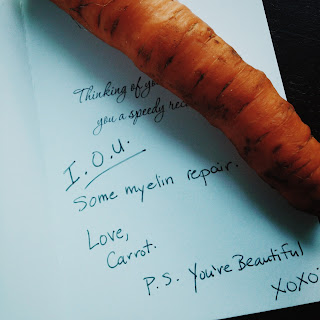 Their medicinal value is questionable at best. The ways in which we plead and bow to them is frankly, embarrassing. Someone should tell the horses not to lift another damn hoof until those dried up carrots have been marinated in maple syrup, dipped in cake batter, deep fried and coated in cream cheese icing. Because that carrot is a shifty lie-teller. With each relapse the promise of remission is dangled a little further away as I creep closer to a more progressive MS. The carrot gets blurrier and just a bit more out of reach. But it’s too late. Once the carrot has been tasted it cannot be resisted. The possibility that whatever is happening to my brain and spinal cord could be undone is just too tempting. Never mind that this is an incurable illness and that the only guarantee steroids are handing out is insomnia, achey joints and six pounds of water weight. The carrot wants you to ignore the risks and bank on the reward.
Relapsing remitting MS is a turbulent trip between periods of utter devastation and unbelievable gratitude for even the tiniest bit of improvement. Over the past year or two my ability to recover has become highly dubious. My luck is running out. Even my status as relapsing is debatable. The carrot has broken its promise.

But now, temptingly, there is a new vegetable on the menu. An experimental treatment, rife with its own unpleasant side effects and whose efficacy is a long shot at best. Nevertheless I will put my life on hold for a little while and submit to this guinea pig status, embracing the headaches, nausea and barfing. I totally needed to lose six pounds before Thanksgiving anyway. Because it might help. How? Pfft. Nobody knows. That’s not important. It is the best (and only) offer on the table right now. And a month ago I thought my bargaining days were over.

Link in bio to catch the full interview with the f